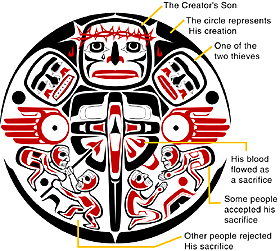 The Creator created the world – the mountains, trees, rivers, and seas. He created all the creatures on this fair land. The Creator also created man and woman from the land and put them in charge to take care of the Creator’s work.

Man and woman were placed on the path of life. They were given the choice of walking on the Creator’s Path or going another way.

The people did not listen to the voice of their Creator. They chose to go their own way and do what seemed right to them in their own spirits.

This caused the Creator much sadness. He loved His creation dearly and did not want them to go their own way. He decided that there was only one way to save man and woman from destroying themselves and all of His creation. He would send His Son to become like them and live on the land.

The time came when the Creator’s Son came down to the earth and took on the form of a little baby. He came from a woman and grew as a child. Soon He became a man-a young warrior.

But this warrior was different. He did not choose to fight. He came to bring peace and to teach.

Not every one liked what the Creator’s Son was saying. They did not want to accept His message of forgiveness and salvation.

Some of the people who followed Him wanted to make Him their chief. Others wanted to kill Him.

One day, those who wanted to kill the Creator’s Son became more powerful. They were able to turn the hearts of their leaders against the Creator. They got permission to have him put to death.

THIS MAN HAS DONE NOTHING WRONG

They hung him on a tree and left him there to die. But the Creator’s Son was not the only one hanging there. They put two thieves on either side of him.

One of the men who was guilty of death hanging next to the Creator’s Son spoke harshly to Him. He said, “If You are the Chosen One of the Creator, save Yourself and us.” But the other man spoke sharp words to the other man. “Are you not afraid of God the Creator? You are also guilty and will be punished. We are suffering and we should, because of the wrong we have done. But this Man has done nothing wrong. He turned to the Creator’s Son and said, “Remember me when You come into Your holy nation.”

The Creator’s Son said to Him, “For sure, I tell you, today you will be with Me in Paradise.”

Those in charge placed guards around to make sure that followers of the Creator did not come to take His Son down from the tree.

SOME BELIEVED, SOME DIDN’T

Many people stood around watching what was happening. The leaders were with them and some of them were making fun of the Creator’s Son. They said, “He saved others, let Him save Himself if He is the Chosen One of the Creator!”

There were women who cried and had sorrow for the Creator’s Son. He spoke to them and said, “Daughters, do not cry for Me. Cry for yourselves and your children. Listen! The days are coming when they will say to the mountains, ‘Fall on us.’ They will say to the hills, ‘Cover us.’

“If they do these things to a green tree, what will they do when it is dry?”

Then the Creator’s Son said “Father, forgive them, for they do not know what they are doing.”

It was dark over all the land from mid-day until the afternoon. The sun did not shine. The ground shook.

Then the Creator’s Son cried with a loud voice, “Father, into Your hands I give my spirit.” When He said this, He died.

MANY REALIZED WHO HE WAS

When the guards noticed that He was dead, one of them took his spear and pierced His side. Blood came flowing out.

At that moment, many of them realized who He was and why He came. The people standing around began to worship the Creator’s Son. Many thought that was the end of the story. But in many ways, it was only the beginning.

The Creator’s Son’s body was taken down from the tree and buried. But just three days later, the grave was empty. He had come alive again.

He appeared to many of His followers. There was much joy and excitement. Some time later, the Creator’s Son returned to the sky to be with His Father. Before He left the land, He told His followers that there would come a day when He would return and that they all would join Him. This made them all very happy.

The Creator’s Book, the Bible, tells us that He created all things to worship Him-including man and woman. It is His greatest desire that we have a personal relationship with Him. Even though man chose to go his own way and run from the Creator, the Creator desires that man walk with Him on the Path of Truth.

Through all time, people have tried to reach the Creator through other spirits, vision quests, living a moral life, religion, and through creation itself. The Creator’s book gives us His plan for how to get on the Creator’s Path to abundant living. Would you like to find that path?